New potential market segments for LED lighting are associated with particularly humid atmospheres, such as those found in medical applications and biotechnology. Harsh industrial conditions with high concentrations of harmful gases also place special demands on LEDs. At present, such demands can only be met with completely encapsulated systems, which come with high manufacturing costs.

Under harsh conditions or in chemically aggressive or corrosive environments, housing with common polymers leads to rapid degradation of the emission properties of LEDs. Therefore, polymers are not suitable for this application. For this reason, the Fraunhofer “HeraKLED” project has developed an all-ceramic packaging technology for LEDs, with which the housing can be completely hermetically sealed. This enables operation in harsh environments with high color stability and constant light output.

The individual components of the all-ceramic housing have been optimally adapted to each other with regard to their thermal expansion coefficients, so that the structure is able to accept a high thermal alternating load. The package was manufactured as a wafer-level version using cost-effective thick-film technology. The packages are made in SMD design, i.e. they are soldered directly to the PCB and have a size of 4.2 x 4.2 x 1.2 mm³ (electric power of 4 x 3 W) for a 4-LED configuration. To ensure maximum cooling for heat dissipation of the LEDs, the interposer is made of aluminum nitride, which offers good conductivity, and with vias. The ceramic light converter wafer made of Ce-doped YAG completes the module (WLF at 20 °C = 9.8 W/mK). All steps for the manufacturing of the packages are carried out at Fraunhofer IKTS. Design and layout can be customized at any time.

These hermetically sealed all-ceramic LEDs can be used in humid environments such as swimming pools, greenhouses or in humid climates. But they can also be employed under harmful gases, such as in tunnels, farms and sewers. 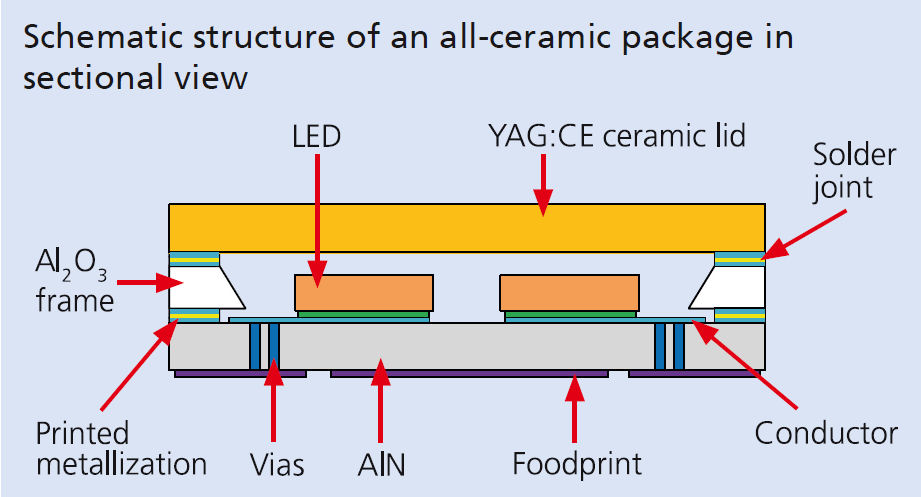