cerenergy® is the Fraunhofer IKTS technology platform for “low-cost“ ceramic sodium batteries. Development work is focused on use of high-temperature Na/NiCl2 and Na/S batteries for economical stationary energy storage in connection with renewable energies for increased power generation. 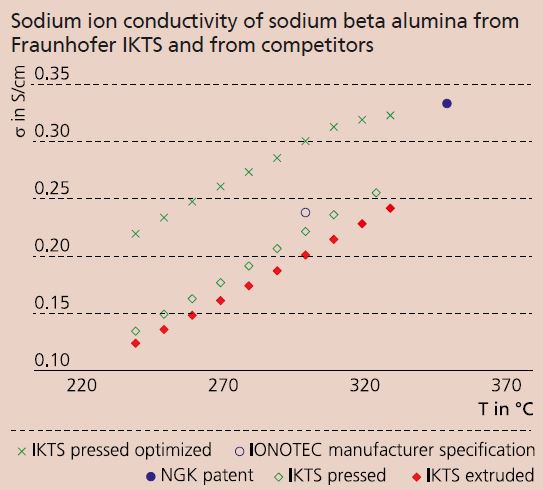 With target costs of €100/kWh (at the cell level), economical battery applications in combination with photovoltaics and wind energy will be made possible. The desired system size ranges from 10 kWh for household use up to a few MWh for commercial applications. The defined cerenergy® goals will be realized by:

The production of the ceramic sodium-beta-alumina electrolyte by extrusion is key to the success of cerenergy®. Extrusion yields a much higher productivity than that achievable with (state-of-the-art) pressing technology. Through ongoing optimization of the ceramic processing parameters, electrolyte samples with the desired properties could be manufactured. Dense electrolyte tubes with single-ended capping were obtained. The ionic conductivity and the Na-ß”-alumina phase content were determined experimentally to be 0.21 S/cm and 94 %, respectively. These values are slightly lower than those of pressed beta-alumina samples and hence need some improvement.

Furthermore, the extrusion process has to be scaled up to realize electrolytes with realistic geometries. A robust cell design, mainly consisting of standard components, was developed, and thermomechanical stresses were checked by FEM analyses. The cell lid was redesigned to replace the conventional thermocompression bonding technology. The goal of this innovation was to develop a method for sealing the ceramicceramic and the metal-ceramic joints in a single step.